Samsa woke from troubled dreams, he found himself transformed in his bed into a horrible vermin. He lay on his armou like back and if he lifted his head a little he could see his brown belly

Rivers of the Amazon: Poetic Affluents and Contested Modernities 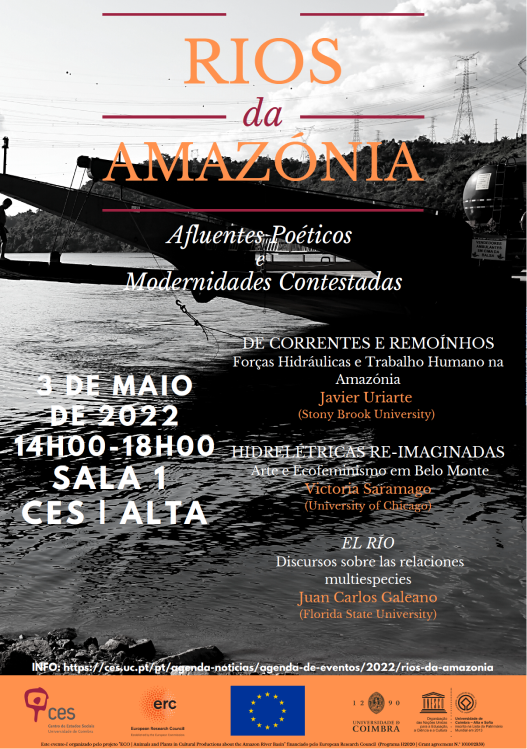 Rivers are central to the existence of Amazonian populations, playing a key role in the way Indigenous and riverside communities get nourishment, travel and trade. The imaginary of these communities is determined by close contact with rivers, which are often equated with giant snakes, considered a source of life in local cosmologies. At the same time, rivers are now used as communication and transport routes or for the construction of hydroelectric power dams, and represent an important element in development projects that aim to connect the Amazon to international markets. In this colloquium, we analyse the relevance of these modernization processes for Amazonian river systems and the impact that the current management and appropriation of these aquatic territories is having on the lives of Indigenous and riverside communities in the region.

Focusing on the writings of Colombian engineer Miguel Triana from the early twentieth century, and considering the drastic transformations in the Amazonian landscape today as a consequence of the construction of hydroelectric power plants, this talk comparatively studies the ways in which rivers have been described, imagined and thought of in the Amazonian region.

This talk discusses how the impact of the construction of large-scale hydroelectric dams has been addressed in contemporary works of literature and visual arts. Drawing on the case of the Belo Monte dam, Saramago examines issues such as the struggle for visibility and processes of narrativization through an ecofeminist trend in current production.

El Río is a documentary about rivers that serves as a reflection on the sophisticated systems of knowledge and scientific literacy that the Amazonian communities have developed to interpret globalization, climate change and the controversial human relationships with rivers, ecosystems and the species that inhabit them.

Speakers
Javier Uriarte is a professor of Latin-American literature at Stony Brook University in the United States. His research areas are travel literature, Latin-American territorial imagination, processes of state consolidation in the region and environmental humanities. He is the author of The Desertmakers: Travel, War, and the State in Latin America (Routledge, 2020) and co-organiser of Intimate Frontiers: A Literary Geography of the Amazon (Liverpool UP, 2019).

Juan-Carlos Galeano was born in the Amazonian region of Colombia. He is a writer, professor and documentarian, author of several poetry books, translations, and of the books Folktales of the Amazon. He is a professor of Amazon cultures and poetry at the State University of Florida, in the United States.

Victoria Saramago is joint professor of Hispanic and Portuguese-Brazilian Studies at the University of Chicago. She is the author of Fictional Environments: Mimesis, Deforestation, and Development in Latin America (Northwestern University Press, 2021). Her research interests include, among others, environmental humanities and study of energy and electricity.